The Scene Selector is home to Plotagon’s 200+ original 3D scenes. Scroll down to see the scene categories, and scroll across to see the available scenes within each category.

Most scenes can accommodate up to two characters, though a few scenes can only have one character. Once you add your scene, you will see either one or two lines that read “Character is” followed by a location within the scene. Example:

To add a character, click on the word “Character” to launch the Character Selector.

If you know which character you want to place into a scene, you can type the name into the Search bar at the top of the screen.

If you don’t want to have a character in the scene (or only want one character), then click the X icon.

Once you choose your character, that character will appear in the video preview window. To change the character’s location in the Scene, click the text that appears to the right of the character’s name. Example: 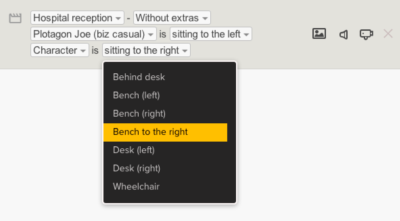 Each scene includes several preset locations from which to choose. Note that two characters cannot be in the same location in the same scene.

Certain scenes also let you include extras. These are non-speaking characters that exist in the background. If you see the text “Without extras”, then it means extras are available in the scene. To include these extras:

Extras can be either non attentive or attentive. Non-attentive extras will ignore any conversation between the main characters and instead look away (generally minding their own business). These are better suited to restaurants and cafes.

Attentive extras will follow whatever dialogue you write and look at the character that is speaking. These are ideal for scenes like office meetings or classroom lectures. To make your characters pay attention to the conversation, click the text “Non attentive” and change it to “Attentive”.

If characters are sitting or standing next to each other, then they can have physical interactions like handshakes and high fives. To insert an interaction: 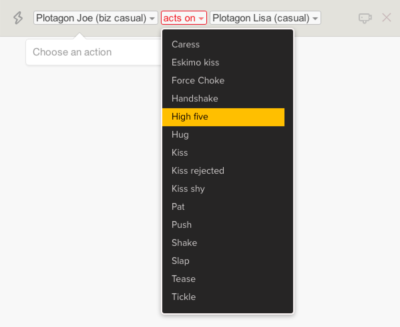 If you receive the message “Target is too far away”, then move one or both of the characters to new locations within the Scene so they are close enough to interact.

A Text Plate is ideal for titles or credits and will produce white text on a black background. To insert a Text Plate: