Making videos with Plotagon: the basics

Making videos with Plotagon: the basics

Plotagon was designed make moviemaking as easy as writing. The intuitive, screenplay-like drag-and-drop interface means you can begin making videos in minutes. Here are a few things to understand before you get started.

Plotagon will save your work every time you either hit the back arrow button to close the script or render your video.

Your scripts are never set in stone! You can always go back and make changes, and then render your video again.

If you want to change a character in one video or scene without affecting the other videos or scenes, then use the Copy Character function to create another version of the character. Learn more about creating characters in Plotagon.

Click an icon (Scene, Dialogue, etc.) to add a new element to the script.

To delete an element from a script, select the element and then click the X icon at the far right end of the item.

Drag and drop any script elements to change the order.

Click the play button to watch your movie. You can click the T icon to view the subtitles, and click the expand icon to watch the video in full screen.

Click the back arrow button to return to the gallery of videos.

Click the speaker icon next to any Scene, Sound effect or line of dialogue to adjust the volume of that item. Note that Scenes have their own appropriate background noise, like murmurs of a crowd, running engines, passing traffic, or office fans. 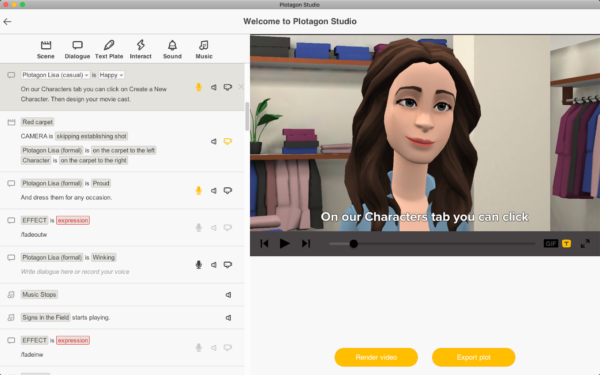 A note about copyright

Plotagon allows you to create scripts from real life or your imagination. You are responsible for ensuring that the words and scenarios that you write are your own, or that you have obtained permission to adapt someone else’s work.

Plotagon Studio also allows you to import audio, including music, sound effects and dialogue, as well as still images. By using this feature, you warrant that you have obtained the necessary permission to use any third-party content in your Plotagon videos.