Turn on or off the establishing shot

Click the camera icon next to a Scene to choose either Establishing shot or Skipping establishing shot. This feature turns on or off the brief wide angle shot of a scene before the dialogue commences.

By skipping the establishing shot, you can cut seamlessly from one scene to the next. You also can use this feature as an editing tool to add more characters in a scene.

Plotagon has a built-in automatic editor called “dialogue mode” in which the camera looks over the non-speaking character’s shoulder at the speaking character. (It’s the traditional Hollywood shot-reverse-shot technique.) However, certain scenes allow you to override this default setting and manage how the camera records the scene.

2. Choose how you want the camera to behave:

3. Select the camera location. This will be similar to the list of character locations and will vary by scene.

4. Select where you want the camera to point. 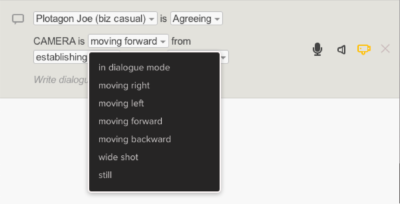 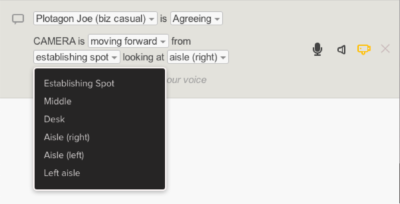 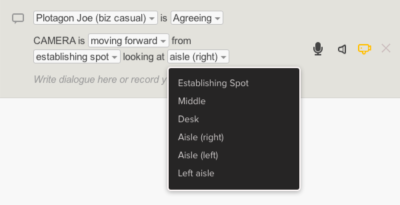 Certain scenes allow you to import a JPG or PNG still image either as a background (like the “Presentation” scene) or as an element within the scene itself.

This features is indicated by the presence of the Import image icon:

Click the Import image icon and browse your computer’s hard drive for a JPG or PNG image.

If you want to place your characters in front of video, then add a new Scene and choose a green screen scene. You then can edit your finished MP4 video in another video editing application.

Next: Save your video file