Turn on or off the establishing shot

The “establishing shot” is the wide-angle view of a new scene that shows the location with the characters. It lasts for about two seconds before the dialogue begins. To remove this brief shot, click the camera icon next to a Scene and choose “Skipping establishing shot”.

By skipping the establishing shot, you can cut from one scene to the next scene without any break. This will speed up the pacing of your movie, and you also can use this feature as a way to add more characters in a scene.

Plotagon has a built-in automatic editor called “dialogue mode”. When a character is speaking, Plotagon will have the camera look over the other character’s shoulder at the speaking character. (It’s the traditional Hollywood shot-reverse-shot technique.) Sometimes you might want to use different camera angles, so certain scenes let you turn on advanced camera controls.

3. Select the camera’s location. (This will be similar to the list of character locations.)

4. Select where you want the camera to aim. 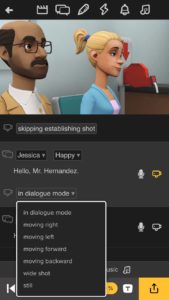 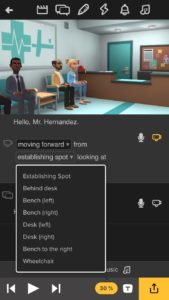 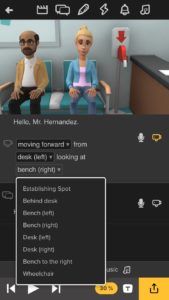 When you have turned on advanced camera controls, the camera icon will turn yellow. If you wish to return to the regular “dialogue mode” setting, simply click the camera icon again.

Thanks to Plotagon’s built-in digital voices, your animated characters will read your dialogue the way you type it in. But sometimes you may want to adjust the timing or pronunciation of the digital voices. Here are a few tips:

See this tutorial for more information and tips on how to get the most out of your digital voices.

Next: Save your video file